“Fashion expresses two contradictory tendencies, taking inspiration from ambivalence, and yet also trying to fix identity in the form of an image or style.” Joanne Entwistle (2006). In a world where awareness of subcultures are the new ‘it’ culture, the ability to buy into cultural capital is a style necessity now more than ever; expressing these two contradictory tendencies.

The fear of looking like everyone else is newly encoded into style DNA through social media’s ability to instantly disseminate information about what’s in and what’s out; what’s in is subculture and what’s out is mainstream. Ironically, this phenomenon isn’t the prominence of subversion, but the prominence of the aesthetic of subversion. In the rise of Dilara Findikoglu’s recent cult following (pun intended), Dilara’s fashion recognition through the grassroots protest of EncoreCSM paradoxes the way her brand commodifies subcultures for the upper class, comprising of those who are cultured enough to know her work and economically stable enough to afford it.

Dilara Findikoglu is a contemporary example of this, playing to the idea of goth fetish subculture as cultural capital, rather, subcultural capital, for her brand. Through the fetishwear aspects of her brand, she is able to invite people into her edgy world of kinky genderbending goth rebels.

Though seemingly democratic, those able to consume Dilara’s subcultural capital are an inherently politicized group, benefitting from the powers that be: race, class, age sex etc. It is in this way that Dilara offers a subversive identity through the bricolaged fetishwear aspect of her brand, most accessible to those who both possess the subcultural capital to know that her work is fashionable, and those who can afford it. Dilara Findikoglu first gained widespread attention when she and a handful of Central Saint Martin’s graduating class of 2015 students staged EncoreCSM, an anti-fashion show representing the bricolage of Dilara’s own personal brand.

In an interview with i-D magazine, an interviewer asks “I: ‘Can you tell us a little about #encoreCSM?’ DF: ‘EncoreCSM was about communicating out subjectivities as young creatives and challenging the structure. It was nice to see something I led is still happening this year.’” The background of EncoreCSM is described by DAZED magazine as “Every year around a third of students on the BA Fashion course at CSM are told they cannot show their collection at the press view. This is purely out of practicality: putting on 100 separate shows is pretty much impossible, and the press are keen to only view the tutors’ selection.”

For Dilara and her BA Fashion counterparts, this explanation wasn’t good enough, so they took to social media to advertise their guerilla-style, inclusive protest fashion show, which, two years later in 2017, has become almost a tradition among Central Saint Martins students.

EncoreCSM was also personal to Dilara, a goal of hers being to “…help raise awareness about things in the industry and help the future generations be less shallow but thoughtful about the mass production and be less about the surface like fashion in general is…I hope that I can help to reduce the massive production and exploitation of people in every field. Find a strategy to make a change, starting with #encoreCSM.”

Here, the democratic aspect of EncoreCSM is heralded in contrast to the aesthetically driven fashion world that Dilara desperately wants to take down. She incorporates this into her personal brand, describing her aesthetic as “…constantly in flux. It’s a bricolage.”

Philosophically, bricolage is defined as “…the re-ordering and re-contextualization of objects to communicate fresh meanings,” which, in Dilara’s case, is seen through her recontextualization of the historical movement of sexual liberation in 1970s fetishwear culture. Yet because she sells this aesthetic through clothing, “Through the signification of difference, style constitutes a group identity. This is achieved through the transformation of the signs of commodities through the process of bricolage.” Thus, the bricolage recontextualizes the idea of commodification by attaching the aesthetic of protest to it, and when presented through Dilara’s fashioned garments that are meant to be consumed, masks the fact that the rebel aesthetic is being commodified in the first place. 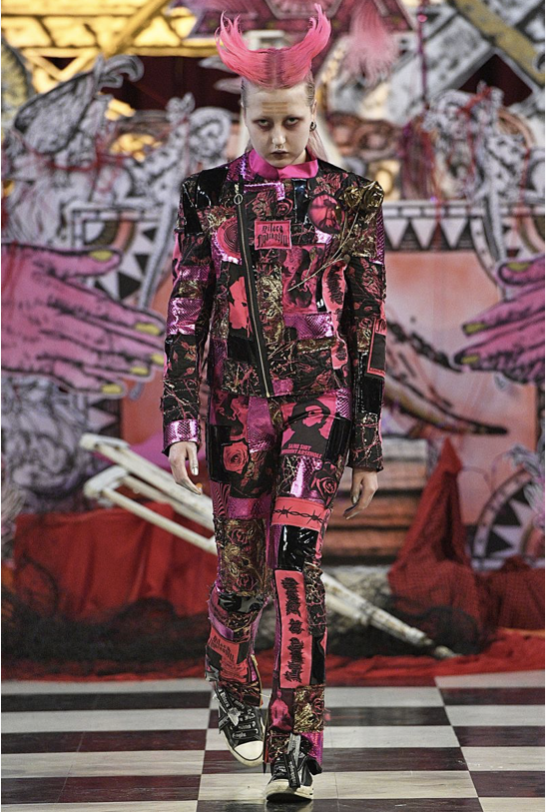 Dilara’s personal bricolage in the garments her brand produces also play into this idea of subversion, transforming the references to mid-twentieth century fetishwear into cultural capital. Bordieu’s ‘Distinction: a Social Critique of the Judgement of Taste’ describes the idea of cultural capital as “the possession of knowledge, accomplishments, formal and informal qualifications by which an individual may gain entry and secure a position in particular social circles, professions and organisations.” This idea can be reduced to how “Taste classifies, and classifies the classifier,” and acknowledges the fact that “Hidden behind the statistical relationships between educational capital or social origins and this or that type of knowledge or way of applying it, there are relationships between groups maintaining different, and even antagonistic, relations to culture, depending on the conditions in which they acquired their cultural capital and the markets in which they can derive most profit from it.”

When asked in interview if she’d always been into garment production as fashion, Dilara says “‘I’ve always been into the attitudes and conventions that came with clothes,’” meaning that she likes the way clothes can reflect an identity.

Within her own personal brand, the identity she chooses to reflect is that of a fetish-y goth subculture. Effectively, she sells this subculture as a form of cultural capital aptly names subcultural capital, which operates similarly to its cultural counterpart through exoticism.

Sarah Thornton differentiates the two by explaining “While subcultural capital may not convert into economic capital with the same ease of financial reward as cultural capital, a variety of occupations and incomes can be gained as a result of hipness. DJ’s, club organizers, clothes designers, music and style journalists and various record industry professionals all make a living from their subcultural capital.”

Dilara evidences this in the way her garments nod to 1970s punk, 80s goth and early 21st century mall goth weaving them together with the common thread of fetishwear. Author Valerie Steele validates fetishwear’s subcultural prominence by detailing how “Fetishism is especially significant at this time in history [1960’s] because it is no longer associated primarily with individual sexual ‘perversions’ or sexual subcultures. Hitherto secret practices have become increasingly visible throughout popular culture.”

In this way, fetishism has been bricolaged into fashion prominence. Initially, fetishism started leaking into the mainstream as an opposition to the popularity of the sexual prudery movement in the 1960s, was bricolaged onto the fashion scene through the prominent design team of Vivenne Westwood and Malcom McLaren in 1970s punk subculture, which eventually turned into subversive fashion iconography due to Helmut Newton’s photography by the 1980s and 1990s. Because Dilara bricolages subcultures, namely fetishwear, into high fashion, it becomes subcultural capital within the framework of high fashion whether intentional or not. 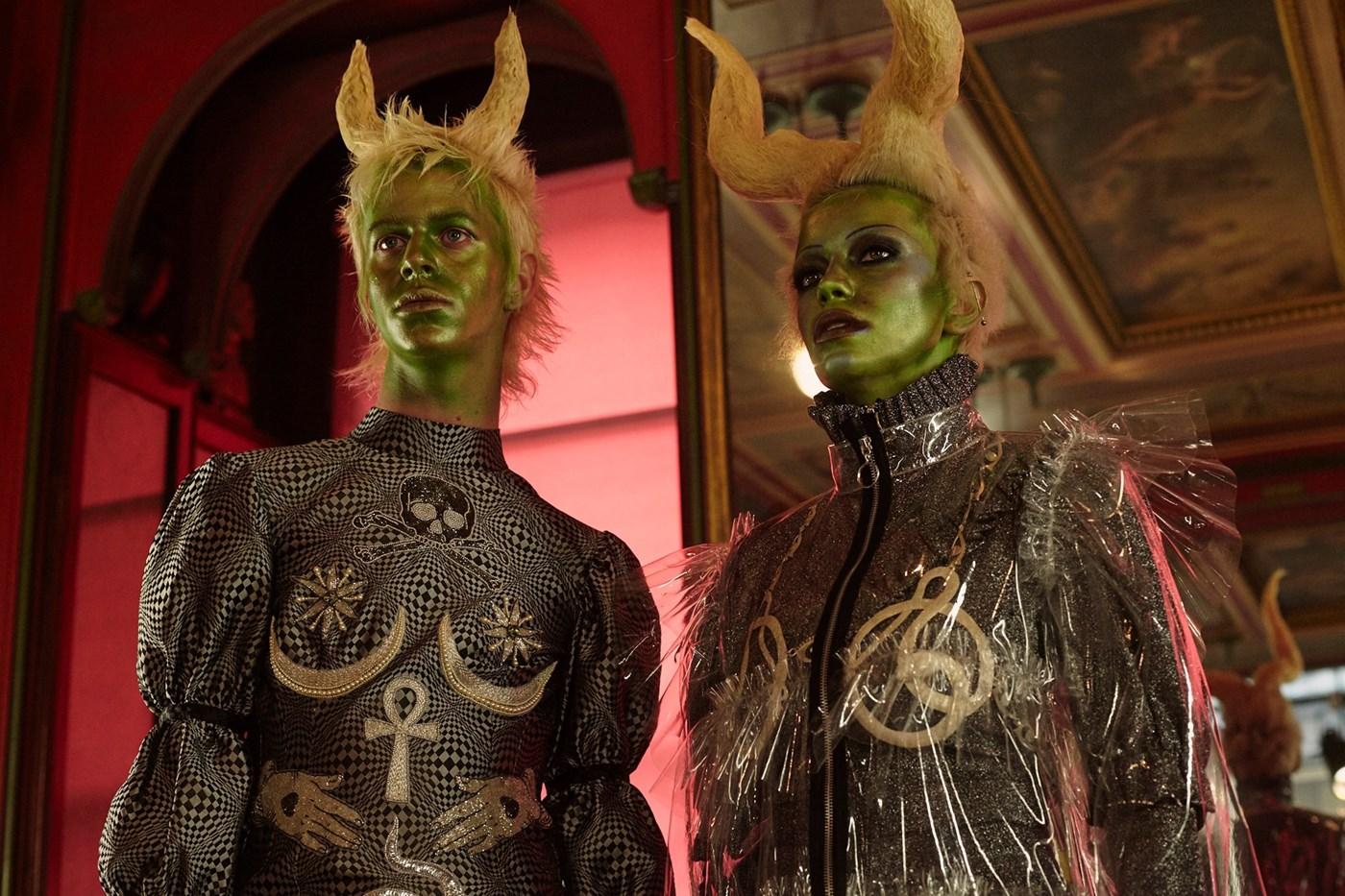 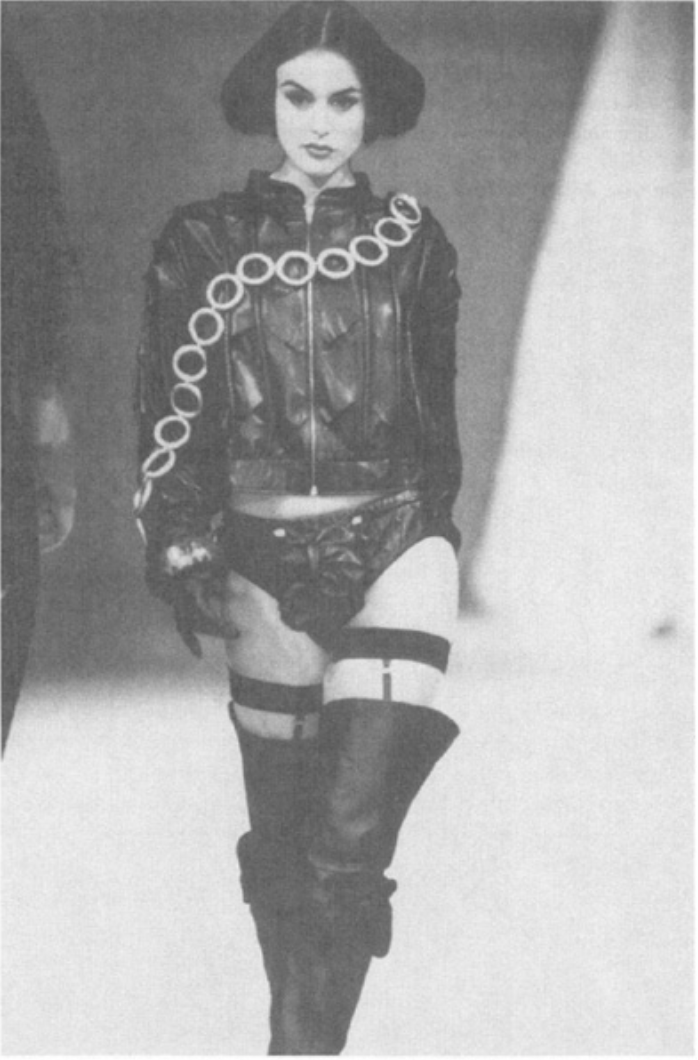 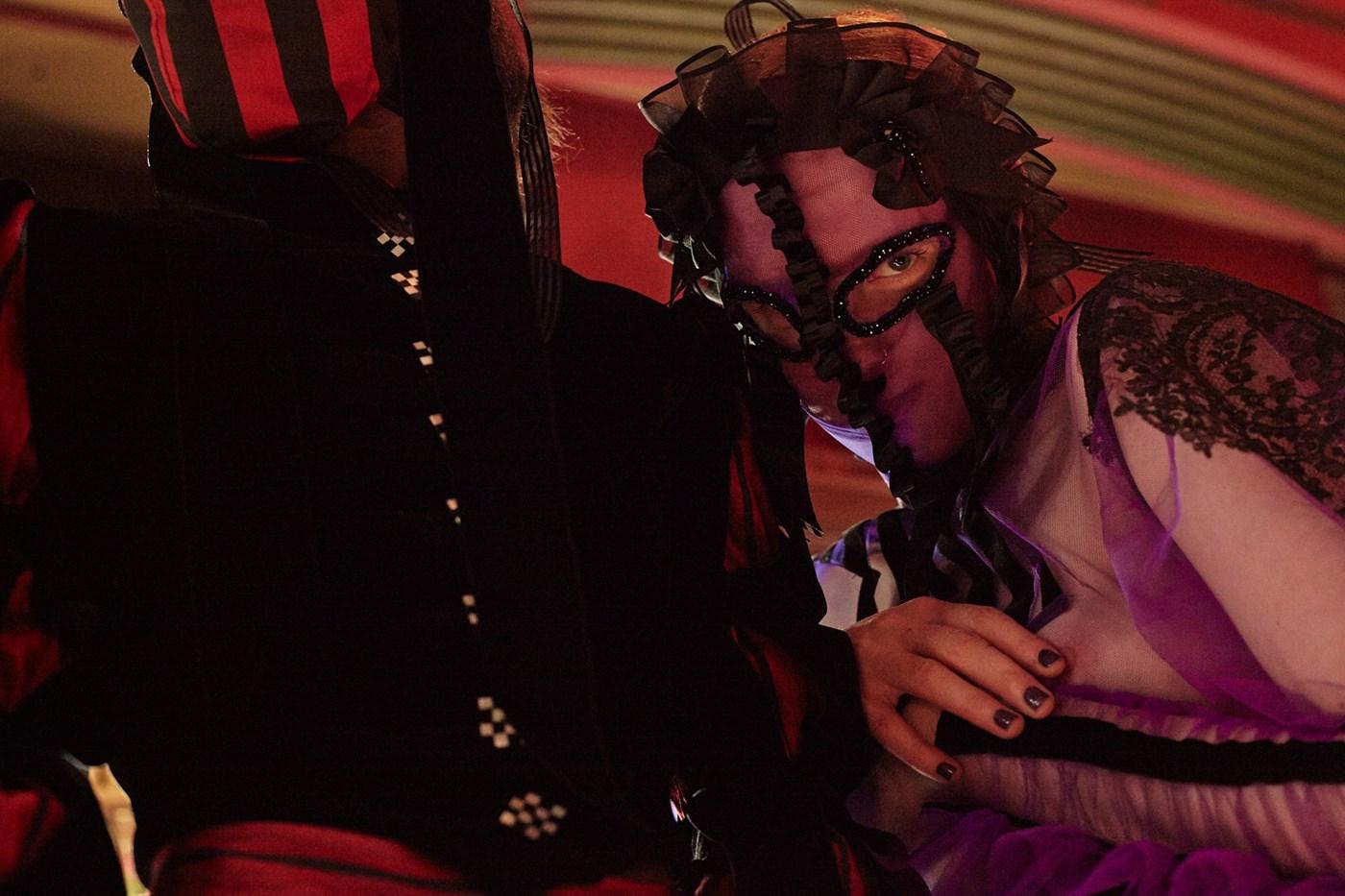 Moreover, “Throughout this graduated scheme of vicarious leisure and vicarious consumption the rule holds that these offices must be performed in some such manner, or under some such circumstance or insignia, as shall point plainly to the master to who this leisure or consumption pertains, and to whom therefore the resulting increment of good repute of right inures.”

This reflects the idea of the prominence of the label as the ultimate signifier of conspicuous consumption. In the case of Dilara’s brand, her specific bricolage of goth and fetish subcultures serves as the desirable label. The way Dilara’s bricolage is structured is its own aesthetic, people will fall in love with her specific distillation without ever having any knowledge of where it comes from; effectively high fashion appropriates subculture for profit in this way.

Being able to buy into subculture is ironic, because the idea of subculture is that it contains no hegemony, its democratic – it’s a group of people united through their cultural hegemony defying interests. The irony comes in how the fashion industry rebrands and commodifies difference as a subversive look. Using Dilara Findikoglu’s brand as an example of this is not to imply that she actively and consciously participates in this commodification in a reductive way.

Dilara regards fashion as art, but in a world where fashion is a more of a product than a process, fashion as consumption is the colloquial understanding. Bordieu explains this conundrum in how “There is no way out of the game of culture; and one’s only chance of objectifying the true nature of the game is to objectify as fully as possible the very operations which one is obliged to use in order to achieve that objectification.”

In the context how Dilara evidences the way in which the fashion industry sells subcultural identity, the fact that identity is so easily constructed and reconstructed through fashion as a commodity proves that “…there is no central self.”

Fashion will always be a way to self-identify aesthetically, and identify with others sharing those common identities, whether it be in a subculture like Dilara or the mainstream. The only way to understand fashion as selling identity and offering a means of cultural or subcultural is as an example of myopic ideas surrounding power structures within identities, and who’s privileged enough to access fashion as a completely subjective force of expression.

Playing with Death (I Died While Playing): Absurdity, Documentary Ethic, and Mythologization

SEE THRU U I’M SEE THRU: Crystalline Machines and PS2 Dreams

What Did You Just Call Me?!? The Cruel Optimism of Black Panther (2018)